Jayden and Hilton were doing the Terry Fox Run. Every time we to got to a certain point we would run. We both got 12 stamps!

(Because our school is on a highway, our Terry Fox Run consists of our students running/walking laps around our huge playground. After each lap, they get their card hole-punched so that they can keep track of how many laps they completed. It is lots of fun, and our kids enjoy the afternoon. This year, our small school raised $1764. to send to The Terry Fox Foundation! ~Mrs. Tervoort)
Grade 4 Ecology Day - October 2, 2017

On Oct. 2nd, 2017, the Gr. 4 class went to Oak Hammock Marsh for Ecology Day. We learned about habitats, birds, bugs, what's at Oak Hammock Marsh, and hibernation. We played some fun games like a ball tag game and a migration game. We went critter dipping too, and we caught some cool things. We also did some bird games, like we dropped a bead in a cup without stopping, and more! We had an awesome day there. I love Oak Hammock Marsh!

(Ecology Day is a bonus field trip that all of our Gr. 4 students in the Interlake School Division get to attend at Oak Hammock Marsh, paid for by the division! Who doesn't love free? And, the kids learn so much that fits right in to our Habitats and Communities theme in Science, along with having lots of fun! ~Mrs. Tervoort)
Grade 4 Breakout - October 3, 2017

On October 3rd, 2017 the Grade 4's had a breakout mission. Some of the locks were easy to unlock and some were hard. We had 45 minutes to unlock the locks. We found hints in our bag that we had. One of the hints was on a video on the iPad. Nobody unlocked all of them. When the timer went off Mrs. Tervoort told us how to unlock the other locks. There were three groups. My group was Kade, me, Kale and Cai. In the box we tried to get into, we had candy, movie tickets and a book! We had a great time trying to get into the box.

(This was this class's first time to try a breakout. They had clues to solve, that would either give them the combination to a certain lock, or give them the location of a key to open another lock. This activity definitely gave us a chance to work as a team, to use a variety of problem-solving strategies, and to see who worked well under the pressure of a ticking clock! The class showed great perseverance, despite not being able to open all of the locks! Great job, Grade 4's! ~ Mrs. Tervoort)
Breakout Boxes - October 3, 2017

On Tuesday, October 3rd, 2017, we did breakout boxes. The theme was "Monsters University". We had 3 groups. I was with Aiden, Migel, Elle and Ruby. Randall stole Mike and Sulley's textbooks. We had 45 minutes to open it. The first one we opened was a simple padlock. The key was in a book. The next was a four-digit code. The code was what year Monsters University opened and it was 1313. There was a four-letter code and it was TELL. The clue was: No one can Tell you you're not scary and nobody can Tell you are small. There was an arrow lock that was the hardest one out of them all. When we opened it there was a book, 2 candies for the group, and a movie ticket for everyone. When it was over we watched "Monsters University"!

On October 16, we ended our camping activities. We got camping trail mix. We mad smore magnets. We made sleeping bags. We made boots. We read in the dark with flashlights. We made lanterns. We made a camping ABC book and a book about Smore Fun with Cartoons by the Grade 4 class.

(Our Back-to-School Theme this year was all about camping! Smores were definitely popular, as we made magnet ones out of fun foam, drew cartoons about them, and even made some real smores in the microwave! Some of our writing during this time was based on camping as well...we made poems, using our 5 senses, telling about what we saw, heard, smelled, tasted and felt while we were camping or hiking...and we wrote our "Five Days of Camping" songs...On the 1st day of camping, my mother cave to me - one sleeping bag! I am sure we will continue to do a few camping things here and there throughout the year...after all, who doesn't like to curl up with a good book and read by flashlight! ~ Mrs. Tervoort) 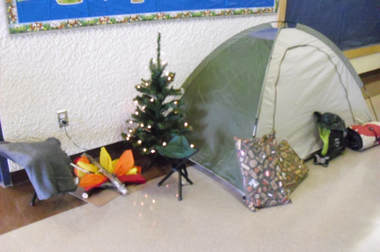 (On this day, our school was signed up with the World Speed Stacking Association, to help break a record for the most people around the world speed stacking on the same day. We are still waiting for numbers to be verified to see if the record has been broken! At our school, each class reviewed the stacking rules, practiced stacking their cups in the correct pyramids, and played a few games like relay runs, stackers and blasters and pyramid race. It was a lot of fun! We are hoping to have a Speed Stack club this year! ~ Mrs. Tervoort)
Jersey Day - November 17, 2017

On Nov. 17th we did Jersey Day. A lot of people wore jerseys and no surprise, a lot of them were Jets jerseys. Mrs. McMurtry wore her high school lacrosse jersey. It was a Manitoba lacrosse jersey. Some people also wore their Stonewall Blues jerseys. Some wore Jets t-shirts with a number and a last name on the back. Some of them were customized with their favourite number and their last name.

(Yes, I was one of those "many" who wore a Winnipeg Jets jersey - it is my husband's, and the only jersey in the house! ~ Mrs. Tervoort)

Bookmobile is great and fun. When ever I can't find a good book and there's no Library, there is Bookmobile. The limit is 4 books so I never get bored of the book. I Like it. There's not many bookmobiles in Canada so we're lucky we have one. Thanks for reading!

(Our  Bookmobile is a large, specially designed truck that our regional library operates. The back of the truck has built-in shelves, full of books for all ages - kids to adults. It drives throughout our local communities, stopping at schools, day cares, seniors' complexes, etc., to allow people to borrow books. It comes back every three weeks, so that we can return our read books and take out new ones! We are very lucky to have one of the only bookmobiles left in Manitoba. 2018 is the 50th anniversary of our bookmobile! ~ Mrs. Tervoort) 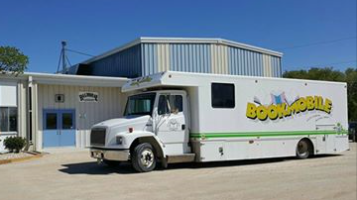 Intramurals are fun. We get to stay inside and play games. Every Intramurals there's a different game. There are four teams. Two teams play every second break. I like Intramurals.

(For our Intramurals, a few of the Gr. 5/6 boys are in charge of organizing the activities. They make up the teams, with students from Gr. 4 to 6 who want to participate, and make up the schedule of when the teams will play. They are also in charge of finding out which games students would like to play, and deciding what they will be doing each day. All of the students seem to be enjoying these fun times! ~ Mrs. Tervoort)

I Love to Read Month

We all know February is the I Love to Read month...but our school is doing lots of fun activities like dress like a tourist and wear read and white! But the funnest thing we're doing is a reading competition! So what you do is you read abook and fill out a form. If your family group reads the most books by the end of the month you win a popcorn party! I won a popcorn party once! Every year we do the popcorn party. You get new family groups every year!

(This year, our school's theme for I Love to Read this year was based on the Olympics. One day, we dressed like this year's mascots. We are also having a Matchy-Match day...dressing like a partner...What a fun way to spend a cold month! ~ Mrs. Tervoort)
Electricity Presentation

On March 19th-23rd it was Milk Spirit Week. Monday was Cow-Moo-Flage. Tuesday, it was milk and cookies. Wednesday was C.S.I. (detectives). Thursday it was the Wild, Wild West. Friday was going to the Moo-vies. My favourite one was the going to the Moo-vies. It was an amazing week! I had so much fun dressing up.

(On Monday, we dressed in camo, or in a disguise (there were even a few cows). We also had a guessing contest, to figure out how many MILK chocolate and cookies and CREAM eggs were "hiding" in the jar. On Tuesday, if we ordered milk, we also got free Oreo cookies! On Wednesday, we dressed as detectives for CSI (Cow Science Investigation), and had to solve the mystery of the missing cows. On Thursday, we dressed as cowboys or farmers. On Friday, we dressed as our favourite movie characters, and ended the day watching a movie! It was a great way to end the week before we were off for spring break! ~ Mrs. Tervoort)
Collaboration with the Gr. 5/6 Class

In Collaboration we are doing games but last time I and the class saw a show. It was awesome but I only watched it once - all the other people watched it twice. We also did a thing where we were telling lies and a truth about a picture. It seems a truth was stronger than a lie. We do some crafts and put them outside.

(Our Gr. 4 class is working with the Gr. 5/6 class two periods a cycle for some collaborative work. During one period, we are learning about the Seven Teachings - Respect, Humility, Love, Courage, Honesty, Truth and Wisdom. We have lots of discussions/books/activities based on each teaching, and end each teaching with a craft or final product. The other period is spent playing math games in multi-grade groups. The older students teach the younger students a variety of games, based on their  levels and needs. Our collaborative time is a lot of fun, as well as providing some great learning opportunities! ~ Mrs. Tervoort)
Swimming Lessons

We started swimming on May 18th and we go to the Secondary Selkirk Regional School. It's not like regular swimming lessons. We do 2 groups and work on our skills, but it's really fun!

(This is our first year to do swimming lessons with our students. The Gr. 4 and the Gr. 5/6 classes were selected to go. One group has an hour lesson, while the other eats their lunch, and has a short time for school work. Then, we switch. The students are working on their various swimming skills, and are at different levels, but all have the opportunity to grow. Hopefully, this life skill will keep them safe, wherever they are, and whenever they are around water! ~ Mrs. Tervoort)